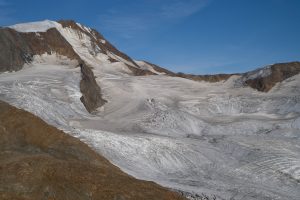 The data set consists of 21 digital elevation models (DEM) with a cell size of 10x10 m. The DEMs are generated on base of Airborne Laser Scanning (ALS) data which were acquired in the period of time from 2001 to 2013. The ALS measurements are mainly used to study the volume changes of Hintereisferner complementary to direct glaciological mass balance measurements. Hence, at least one scan was performed close to the end of the glacier mass balance year (end of September) each year. In the glacier mass balance years 2001/2002, 2002/2003, 2007/2008, 2008/2009 and 2010/2011 project-based intermediate campaigns were carried out too. An overview of the data with information about flight dates, used sensors, mean flight heights above ground [m], pulse repetition rates [Hz], across track overlaps [%], mean point densities [points per square meter], vertical accuracies [m] and projections is given in the attached table below. […]