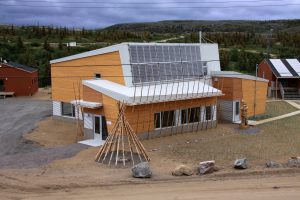 Following the 2006-2012 action plan on climate change entitled 'Le Québec et les changements climatiques, un défi pour lavenir', the Government of Quebec implemented the tools needed to ensure that Quebec can adapt to the impacts of climate change that will affect Quebec over the next decades. Action 22 of this plan focuses on strengthening the monitoring network of climate, water resources and groundwater. The implementation of the monitoring network of groundwater in Quebec (réseau de surveillance des eaux souterraines au Québec or RSESQ) completed in 2012 by the Department of Environment of Quebec (Ministère du Développement durable, de lEnvironnement, de la Faune et des Parcs or MDDEFP) addresses this issue. A subnetwork of the RSESQ was deployed near the Northern Village of Umiujaq in Northern Quebec (Fortier et al., 2013a). This subnetwork is called 'Immatsiak network' which means source of fresh water in Inuktitut. During a drilling campaign in summer 2012 in a valley leading to the north end of Lac Guillaume-Delisle, nine groundwater monitoring wells were installed according to the norms of the MDDEFP in seven sites located in the valley. Water levels measured in these wells since their installation are available on the MDDELCC website. Three other wells down to a depth of 35 m have been also installed in three of the seven sites. In addition to a thermistors cable driven in the previous observation well, a thermistor under a solar radiation shelter was also installed to measure the air temperature in each of the three sites. Hourly air temperature and soil data are recorded using an automatic data acquisition system. Each hourly data is the average of data measured during the preceding 60 minutes period. The owner of these date is the MDDEFP. However, these data are available in this electronic publication of Nordicana D.