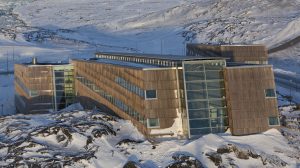 SoilFen is one of the three automatic soil stations in Kobbefjord. Data from the station is found under Meteorology (air temperature, relative humidity and PAR) and Soil Properties (soilwater chemistry, soil temperatures, soil heat flux). The station was established in 2007 and is placed in the moist fen 40 m.a.s.l. close to the InteractFen (Meteorology, Soil Properties, Snow Properties), the EddyFen and the Methane station (Fluxmonitoring). The station (CR1000 logger) is running West Greenlandic Winter time (WGWT). The meteorological dataset from this station consists of air temperature and relative humidity (2007-2017: Vaisala, HMP45AC, 2017-: Campbell, CS215) measured in radiation shield two m. above ground, until 2017 PAR and sunshine hours (Delta-T, BF2). Until 2016, PAR was also measured 20 cm above ground (SoilFen Meteorology 1min), logged every minute. Data comments: In spring 2017 a fox destroyed some of the cables for the station. The air temperature/relative humidity sensor Meteorology:Meteorology GeoBasis Nuuk:The GeoBasis monitoring programme focuses on selected abiotic characteristics in order to describe the state of Greenlandic terrestrial environments and their potential feedback effects in a changing climate. Monitored plot data is up-scaled to a landscape level and is used to improve ecosystem models to be able to quantify these feedback mechanisms. The GeoBasis programme provides an active response to recommendations in international assessments such as ACIA and SWIPA; and is continuously being adapted based on AMAP and other international founded recommendations. Furthermore, the GeoBasis programme is directly involved in several international networks and research projects (e.g. the Circumpolar Active Layer Monitoring (CALM) programme, the Nordic Centre of Excellence DEFROST, the Danish Centre of Excellence CENPERM, the EU-projects PAGE21 and INTERACT, and the Arctic Research Centre at Aarhus University). The GeoBasis programme is divided into a number of sub-groups, including: