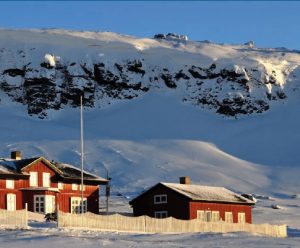 The automatic weather station AWS2 was established in August 2012 in Østerlien just 100 meter east of Arctic Station. The station is running West Greenland Time (UTC-3). The station is located approximately 25 meter above sea level in a gentle south sloping area covered by low vegetation/dwarf shrubs. The snow/air temperatures are measured by a thermistor string inside a probe placed upon the ground. The thermistors are not shielded and therefore the temperatures measured by this probe should only be regarded as valid when covered by snow. When the thermistor is free of snow the temperature will be affected by the sun. Snow depth data from AWS2 are found under Snow (AWS2-SnowDepth). More data from AWS2 are found under SoilProperties (AWS2-GroundTemperatureProfile1 and 2, AWS2-SoilMoisture, AWS2-SoilHeatFlux, AWS2-Meteorology). Snow temperatures are also measured at various sites with temperature sensor inserted into a snow pit wall. these data are found under Snow (SnowTemperature) Snow:Snow GeoBasis Disko:The GeoBasis monitoring programme focuses on selected abiotic characteristics in order to describe the state of Greenlandic terrestrial environments and their potential feedback effects in a changing climate. Monitored plot data is up-scaled to a landscape level and is used to improve ecosystem models to be able to quantify these feedback mechanisms. The GeoBasis programme provides an active response to recommendations in international assessments such as ACIA and SWIPA; and is continuously being adapted based on AMAP and other international founded recommendations. Furthermore, the GeoBasis programme is directly involved in several international networks and research projects (e.g. the Circumpolar Active Layer Monitoring (CALM) programme, the Nordic Centre of Excellence DEFROST, the Danish Centre of Excellence CENPERM, the EU-projects PAGE21 and INTERACT, and the Arctic Research Centre at Aarhus University). The GeoBasis programme is divided into a number of sub-groups, including: